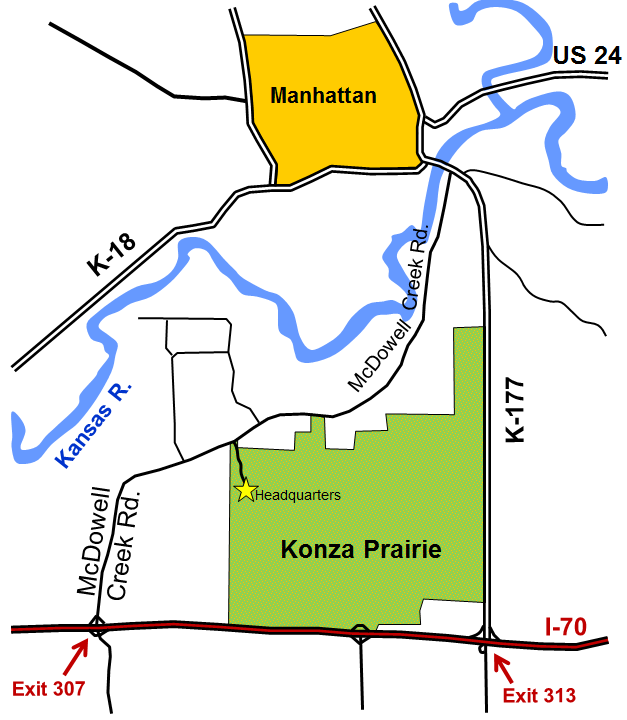 Konza Prairie is located in the Flint Hills region of northeastern Kansas, approximately 10 km south of Kansas State University and the city of Manhattan (39°05'N, 96°35'W). The Flint Hills are steep-sloped and overlain by shallow limestone soils unsuitable for cultivation. This region encompasses over 50,000 km² throughout much of eastern Kansas from near the Kansas­Nebraska border south into northeastern Oklahoma and contains the largest remaining area of unplowed tallgrass prairie in North America. Hence, the vast majority of Konza Prairie, and the surrounding landscape, has not been plowed and retains its native characteristics. View Research Treatments

The vegetation of Konza Prairie is predominately native tallgrass prairie, dominated by the perennial, warm-season grasses big bluestem, little bluestem, Indiangrass, and switchgrass. A highly diverse mixture of other species includes warm-season and cool-season grasses, composites, legumes, and other forbs. The tallgrass canopy reaches over 2.5 m in height in the most productive years. A few woody species such as buckbrush and smooth sumac are locally common. The grassland habitats include upland prairie on thin loess soils, hill prairie along alternating limestone benches and slopes, and areas of lowland prairie on deep alluvial-colluvial soils which accumulated during the Kansan Glacial Epoch

In addition to the native prairie habitat, the two branches of King's Creek originate on the station and run 10 km through it. Gallery forests dominated by bur and chinquapin oaks and hackberry occur in bands along the major stream courses and cover approximately 7% of the preserve area. Several agricultural fields and restored prairie on former cultivated fields occur on the deep soil lowlands along the lower stretches of King's Creek.

The flora of Konza Prairie includes more than 600 species. Several dozen species of fish, amphibians, reptiles, and mammals, and more than 200 species of resident and migratory birds have been recorded on the preserve. The continental climate is characterized by significant seasonal and interannual variability. Average monthly temperature ranges from a January low of -2.7° C to a July high of 26.6° C. Average annual total precipitation is 835 mm with 75% falling during the growing season.

Most of KPBS is off limits to the general public due to the large number of on-going research projects. However KPBS does have hiking trails available from dawn to dusk, weather and trail conditions permitting. See more information about the public hiking trails.